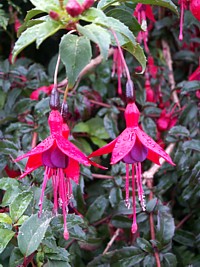 West Cork is the popular name for the western half of Ireland's largest county. As such, it has nothing to do with the actual city of Cork. There is no precise boundary, but West Cork begins somewhere a few miles west of Cork city and extends to Cape Clear in the south and Dursey Head in the west. Thus, it is the size of many an entire Irish county and has its own unique identity, distinct from the rest of Cork.

West Cork is a region of rugged beauty. Villages of brightly painted houses nestle among the hills and valleys. The coastline is deeply indented by long fiord-like inlets. Westwards from Baltimore the view becomes ever more spectacular with high cliffs and countless rocky islands facing out into the Atlantic, while in the distance loom the highest mountains in Ireland. Here and there stand reminders of former inhabitants — Victorian mine workings, Napoleonic watchtowers, mediaeval castles, Iron Age forts, neolithic tombs and standing stones. In historical times the southern part of West Cork was the Barony of Carbery and the O'Driscolls of Baltimore were one of its pre-eminent clans.

The sea is an important influence on the landscape of West Cork, where the Gulf Stream encounters land for the first time on its long journey across the ocean. The mildness of the resulting climate allows tender plants to flourish, even in the wild. One of them, Fuchsia magellanica, has become the unofficial emblem of the region.

West Cork is popular with holidaymakers, especially those seeking somewhere slightly off the well-trodden tourist trail. There are ferries to Cork from the Continent; cruise liners call at Cork harbour; the airport is served by flights from all over Europe; Cork city has all the transport links of a modern city, yet in little more than an hour you can be at Baltimore, in the otherworldly heart of southwest Ireland. 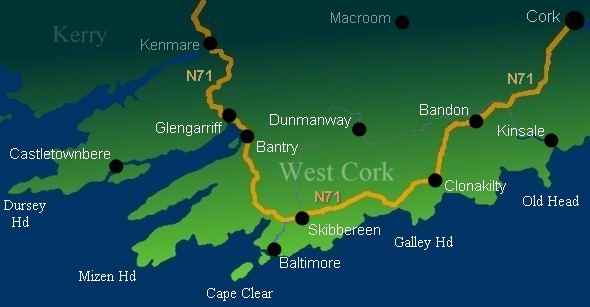