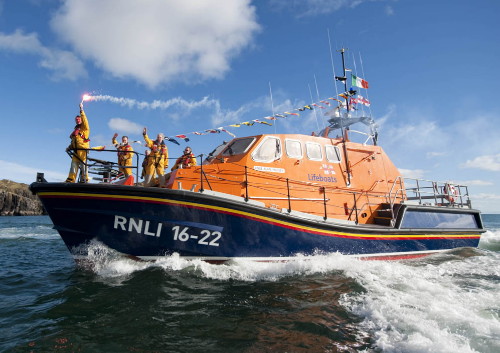 Baltimore has two modern RNLI lifeboats on station — the Atlantic 85 inshore lifeboat Rita Daphne Smyth and the new Tamar class all-weather boat Alan Massey.  Alan Massey is 16.3 metres long with a speed of 25 knots. She carries a crew of seven and is of immensely strong reinforced plastic construction. Unlike previous Baltimore lifeboats she is kept permanently afloat. Her smaller sister, Rita Daphne Smyth, is a 8.44 metre twin-engined inflatable with a crew of four. She has a top speed of more than 35 knots and a range of 2½ hours at maximum speed. The two vessels with their highly trained crews represent the latest in lifeboat technology and continue a proud lifesaving tradition at Baltimore that dates back to the early years of the twentieth century.

The Baltimore lifeboat station was built in 1915, but owing to the war the first lifeboat did not arrive until 1919. She had been launched as the Duke of Connacht, but because of sentiment in the wake of the Easter Rising of 1916 her name was changed to the Shamrock before she arrived in Baltimore. This boat was not replaced until 1950, since when there have been five other lifeboats stationed at Baltimore.

The station has seen more than 600 launches and the saving of more than 250 lives. The lifeboat was deeply involved in events of the tragic Fastnet yacht race of 1979, rescuing the crippled yachts Regardless and Marionette in force 10 winds and 40-foot seas. The Robert was the first lifeboat to put to sea and spent longer at sea than any of the other lifeboats involved in the rescue operation. In the same year the lifeboat assisted in transferring an injured man to Bantry Hospital following a mutiny aboard a Greek container ship. One of the most headline-grabbing rescues was that of the then leader of the opposition, Charles Haughey, when his yacht Celtic Mist sank at Mizen Head in October 1985. A less routine assignment in 2007 was the recovery of bales of cocaine from a failed drug smuggling operation in the same area.

Like other lifeboats, Baltimore lifeboat is crewed by volunteers. The mechanic, Cathal Cottrell, is the only full-time crew member. Down the years Baltimore crews have been honoured for gallantry many times, being awarded a total of seven Silver and three Bronze Medals. Coxswain Kieran Cotter was awarded a Bronze Medal and the crew Letters of Appreciation for a double rescue in October 1991. In a temporary lifeboat, the Good Shepherd, they rescued a Spanish fishing boat Japonica with 15 men on board in storm force winds 20 miles west of the Fastnet Rock and towed her into Bantry. On her way back to Baltimore the lifeboat had to put in to Castletownbere to land an injured crew member and received another distress call to a yacht in difficulties south of the Fastnet. This boat, too, was found and towed safely to Baltimore. The lifeboat was at sea for a total of 26 hours. For this service Kieran also received the Maud Smith Award for the bravest act of lifesaving in 1991.

In February 2012 the long-serving Tyne Class lifeboat Hilda Jarrett made way for the Alan Massey. The new boat is too big to fit in the lifeboat house and instead is berthed in a specially constructed dock alongside. The boathouse now houses the inshore boat which is launched down the slipway on a special trolley. Together the two vessels maintain Baltimore's position in the forefront of lifesaving services in Ireland.